The urban heat island (UHI) effect occurs when urban areas are hotter than surrounding areas. This phenomenon is caused by a high concentration of dark, impervious surfaces such as roofs, walls, and roads combined with a lack of trees and green space. Tall buildings that block or slow air movement, known as urban canyons, contribute to the formation of heat islands, along with waste heat released by vehicles and air conditioning.

Heat islands are dangerous for our communities because they increase the risk of heat-related illness and death. They also make working outside uncomfortable or even dangerous and can decrease productivity and school performance. Heat islands also increase peak power demand because air conditioning systems must work harder to keep spaces cool, which makes power interruptions more likely and increases air pollution.

Studies show that low-income communities and communities of color are impacted more severely by UHIs than other neighborhoods. This is because less investment has been made in trees, parks, and infrastructure in these areas. Check out the below video by The Verge for an example of temperature disparity between neighborhoods in New York City. 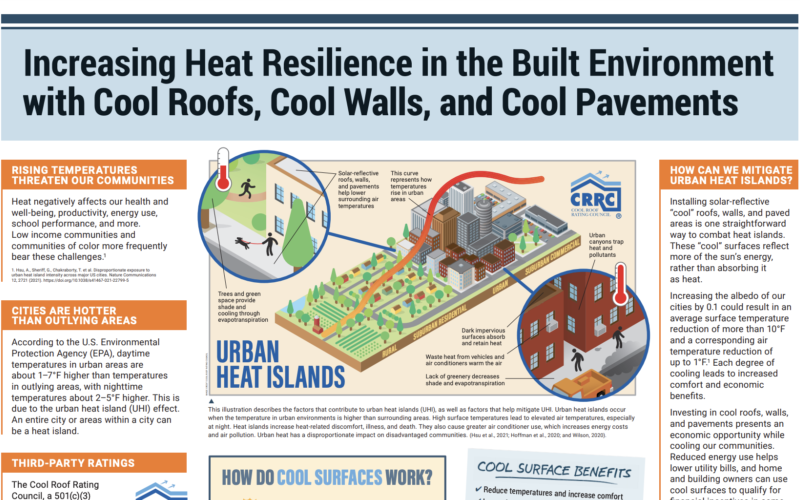 Check out the resources below to learn more about urban heat islands and how communities can take action to reduce them.

Do you have a question that wasn't answered here?
Check out our FAQs page or contact us.

Leadership in Energy and Environmental Design (LEED) is the U.S. Green Building Council's voluntary green building certification system that offers Heat Island credits for the use of cool roof materials.

Resources for Home and Building Owners

Stay up to date with the CRRC